I wrote the following review for 4Columns but my editor felt the book was not worth the space and ended up cutting it. I did get paid (thanks!) so haven’t pursued placing it elsewhere … why not place it here, on this space I have cruelly neglected for more than a year? Behold, my review of Jill Soloway’s She Wants It: Desire, Power, and Toppling the Patriarchy (released mid-October by Crown Archetype). (This was first draft so not as worked over as it would have been if it had gone through 4C’s rigorous editing process.) 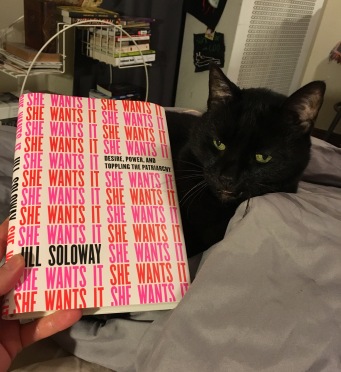 It’s been four short seasons for Transparent; four big years for trans representation and visibility. Since Transparent made history in 2014 as the first TV show with a leading trans character (albeit played by a non-trans actor), its creator Jill Soloway has gone from being an unlikely spokesperson for the trans and queer communities to a member of those communities. In their new memoir She Wants It: Desire, Power, and Toppling the Patriarchy, Soloway charts these changes, telling the story of their own rapid reorientations in the wake of their parent coming out as trans at age 70. Electrified by new queer feminist insights and an impassioned interrogation of gender and power in Hollywood, She Wants It is an unusual celebrity memoir. But in the end, it’s a celebrity memoir. If it’s better than most, still we want more.

That’s because Soloway, creator of the Emmy-award-winning TV show Transparent, is an unusual celebrity, a nonbinary queer feminist with legit creative power and real cultural sway. In She Wants It, they are still astonished at all that; and while the “How did I get here?” humility butts heads with their class privilege (c.f. the “sad supermarket Brie” bought by a personal assistant for their kid’s birthday party (wah wah)): hey, it’s a celebrity memoir. We read it for access to the celebrity world, and Soloway delivers, describing meetings and parties and dinners with the Duplass brothers, Mel Brooks, Shonda Rhimes, among others; directing Kathryn Hahn and Kevin Bacon. More notable, perhaps, are the different celebrity worlds made adjacent here: trans artist Zachary Drucker sharing chapter space with Jeff Bezos; dyke poet Eileen Myles rubbing pages with Reese Witherspoon.

Divided into loosely organized chapters, She Wants It chronicles Soloway’s path from downtrodden Hollywood reject to award-winning director. “Once my parent came out,” they explain, “I was suddenly powered by a huge gust of yes” (25). Soon, Transparent was born—“the script came out so easily, like a slippery baby” (41)—and Soloway arrived not long after, now an award-winning director who has transitioned from married “straightbian” to a nonbinary queer live-processing their breakup with Myles (one can’t get any more queer, we might say, but that would be a dare).

Soloway’s story is nothing if not compelling. It’s also familiar, as it’s been so thoroughly metabolized on the show. In She Wants It, Soloway describes the Pfeffermans as the idealized, “better version of our family” (68), Soloway’s own arc most closely mirrored by Ali’s. Throughout, they reflect on the ways in which the show has shaped their own reality: “This is what’s wrong with writing a TV show about people who are all fragments of you. You can never tell what comes first, the fiction or the reality” (117).

Another hazard, not unexpected, is that Soloway’s fiction exceeds this work of nonfiction on nearly all counts, and especially in its wisdom and daring. Among Soloway’s greatest skills as screenwriter and director is their ability to build emotional precision into scenes that capture behavior as messily ugly as it is uncomfortably comedic. (Their notes on their directing approach, which draws on writer and producer Joan Scheckel’s trademarked Technique of “playable actions,” are illuminating.) The conflicts between the often awful, always riveting Pfeffermans are deliberate and controlled.

In comparison, Soloway’s on-the-page scenes read as uneasy, the authorial “I” pulling back or redirecting just when things begin to get interesting—or, cough, ‘problematic.’ At the end of the first chapter, after Soloway’s trans parent coming out to them over the phone, their then-husband Bruce responds to this news by coming downstairs in one of Soloway’s dresses; the two of them break into laughter. The only commentary offered here is “Jesus fucking Christ.” End scene. Wait, what?

Moments like this—left dangling, begging for self-examination—litter a book that might otherwise be not only entertaining (as it frequently is) but more thoughtful. Soloway offers self-reflection about some choices—such as the “original sin” of casting Jeffrey Tambor, a cis man, in the role of a trans women—but it’s inconsistent and the scene/info balance is uneven. When they’re not barreling to abrupt and confusing ends, as above, perfectly interesting scenes get hijacked by infodumps or successions of vaguely rhetorical questions.

When they do bring analysis, it’s often frustratingly—even willfully—shortsighted. They describe getting a C on a women’s studies paper in college for “failing to interrogate my own heteronormativity” (35). She Wants It gets maybe a B-. Take their discussion of the Divided Feminine—the ways in which women are forced to separate with “another side of themselves” (unclear what side this is) to “access male privilege”: “Men want a good wife, a sweet mommy. In return, a woman gets a house, diamonds, babies, safety” (26). By which they mean straight cis men and straight cis women, of a certain class and experience. (And generation?)

Cutting through the slapdash quality of much of the writing are ecstatic passages devoted to the intensity of new queer love: “Eileen wanted to know the content of the hunger behind my eyes,” Soloway writes. “She was right there next to my brain…Our ideas about the world made themselves alive into shapes to be revealed to each other” (125). Less scintillating are predictable platitudes about family. “We have to love as much as we can, especially when it comes to family” (179), Soloway offers. This kind of banality seems beneath Soloway, more like the treacly This Is Us than what we might expect from the creator of Transparent.

Though an author’s note alerts us that Soloway will play “fast and loose” with pronouns, they offer little commentary about the title. She Wants It speaks to the book’s concerns with ambition and consent, the show’s interest in the female gaze and its demonstration of female consent. Soloway doesn’t ignore the pallor cast by cast and crew members’ accusations of Tambor’s sexual harassment on set, addressing it (inadequately, likely owing to legal issues) in a chapter titled “Oh, Fuck.” Now that Amazon has dropped Tambor from the show, a big question mark is hovering over the final season, scheduled for release next year. It’s maybe for this reason that the book feels oddly timed and not quite done, its arc incomplete like the story its telling, which includes the story of Soloway’s publicly new-ish gender journey. In a year or two, Soloway might have a clearer, more solid container for all of this. The book would be better for it.